The Risky Business of Photographing the Boer War

During the Second Boer War in South Africa (1899-1902), photographers had to work with slow cameras and heavy tripods, which left them at risk of getting shot and even killed. So instead of capturing the line of fire between the British Army and Dutch settlers, they preferred to focus their lenses behind the scenes. The results are images which don’t zoom in the action but might have an even greater value to history. This is evident in two photograph albums located in Special Collections: the Boer War – Natal Photograph Album and the South Africa-Transvaal Photograph Album. 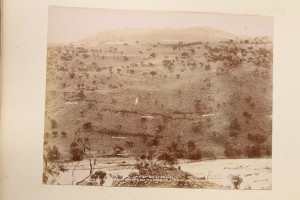 By the turn of the century, Kodak had begun producing smaller cameras, such as the Brownie Box and A1 Folding camera. But technology was still very slow, which made it difficult for photographers to capture ongoing battles (to the discontent of news editors). This limitation might have contributed to history after all. The Natal Photograph Album includes photographs taken by a photographer with the initials J.E.M.while he was trailing behind the British army. They show a panorama of the battlefields, and once printed on paper, captions and notes were added to indicate the position of the British infantry and Boer trench lines. This information is now evidence of the war’s groundbreaking military strategy.

The same is true for the album’s photographs portraying crews of the Royal Navy posing next to 4.7” naval guns. Photographer Benjamin William Caney captured one of these scenes just after Pieter’s Battle in 1900. The guns used in this battle are extremely important, since their introduction eventually led to British victory, after months of disadvantage due to long range Boer artillery.

Other pictures in the Natal Photograph album, taken by an unknown photographer, reveal snapshots of British military life, including one that shows an improvised game of rugby in one of the camps. The Transvaal Photograph Album, on the other hand, shows the rise of Johannesburg in Boers’ hands and the exploration of gold mines. And in both albums there are pictures of local tribes and Africans who worked in the mines or ‘volunteered’ in the war.

These images might not depict familiar war themes like combat, death, and blood. But they have what philosopher Roland Barthes once called the “essence of photography”: they serve to bring the past into the present. Having frozen a period of time by capturing uniforms, facial expressions, and military strategy, the Natal and Transvaal photograph albums contribute greatly to an understanding of history.