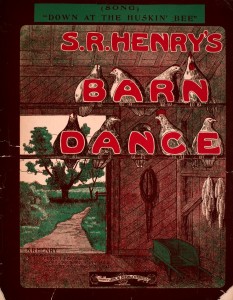 Strike up the band! The Sheridan Libraries are happy to announce a major upgrade of our popular Levy Sheet Music Digital Collection. While the content is the same as in the previous version, we have redesigned its user interface to include several new search and display features. Lester S. Levy (Johns Hopkins B.A., 1918), a Baltimore hat manufacturer and amateur pianist, started collecting sheet music in the 1930s.  By the 1970s he had collected almost 30,000 titles and written several books on the subject. In 1987 Mr. Levy generously donated his entire sheet music collection, as well as his collection of other music memorabilia, to his alma mater. The Sheridan Libraries digitized the sheet music collection and made it available to the public in the late 1990s.

The refreshed look of the digital collection includes a single search box placed front and center, three browsing options on the top page, and an updated graphic design. If you dig a little deeper, you will find some new options such as faceted searching (narrow your results set by date, composition type, etc.) and multiple display modes. By clicking on the three boxes in the upper-right corner of a search results screen, you can display covers plus some descriptive information, covers only, or titles only. This is very handy if you are looking for a specific title or for an interesting cover illustration. The new interface is also optimized for mobile devices and allows navigation through gestures such as the swipe.

The Levy Sheet Music Collection appeals to a much broader audience than musicians or musicologists. Mr. Levy assembled a treasure trove of popular songs that document American life in the 19th- and early 20th-centuries. Historians might be interested in topics such as presidential elections, the temperance movement, and the rise of the railroads. Sociologists can study how minority groups such as the Romani or African Americans were depicted in popular culture. Art historians can savor the rich illustration styles of subjects such as flowers or horses. And who would have suspected that there were popular songs about Darwin’s theory of evolution? This collection truly has something for everybody.