The Year of Three Popes 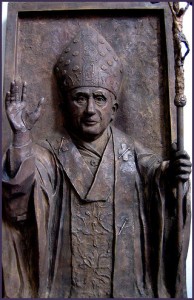 The last time a pope resigned was in 1415, almost 600 years ago when Gregory XII stepped down. Papal resignations are rare – almost as rare is a Year of Three Popes. My freshman year at JHU, 1978, was the last one. I was reminded of this by a friend who was with me when we found out that Pope John Paul I had died. Such a thing hadn’t happened since 1605, when Pope Clement VIII was succeeded by Pope Leo XI, followed by Paul V.

This led me on a quest to learn more about the papacy, starting with The Papacy: An Encyclopedia. While I didn’t find anything more about The Year of Three Popes, I did come across in interesting entry on Pope Joan, a woman who was supposedly elected pope in the 9th century (p. 829). While this is largely dismissed as fiction, its popularity, according to the encyclopedia entry, can be seen as a reflection on the church’s prohibition on ordaining women.

As the cardinals from around the world gathered at the Vatican to choose the next pope, I began to wonder about the history of Catholicism in the U.S. and the sometimes rocky relationship between American Catholics and the pope. A quick search of America: History and Life led me to an article about Archbishop John Carroll of Maryland. Even while he was creating the American see, he questioned papal authority.

Archbishop Carroll’s legacy included the construction of the first cathedral in the newly-independent United States, Baltimore’s Basilica of the National Shrine of the Assumption of the Blessed Virgin Mary. Designed by noted architect Benjamin Henry Latrobe, it remains one of the nation’s architectural treasures.