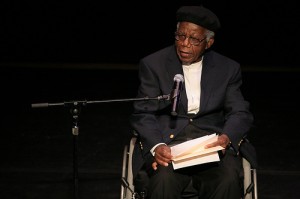 Chinua Achebe, the renowned Nigerian novelist and essayist, died on March 22, at age 82. Achebe was best known for his ground-breaking novel of 1958, Things Fall Apart, which dramatizes the tensions between indigenous African culture and British colonial values. Along with Amos Tutuola’s The Palm-Wine Drinkard, Things Fall Apart virtually launched a new genre: the post-colonial African novel.

The title of Things Fall Apart references a line in the poem “The Second Coming” by William Butler Yeats, turning the tables on modernist malaise in the wake of World War I. The poem begins:

Turning and turning in the widening gyre
The falcon cannot hear the falconer;
Things fall apart; the centre cannot hold;
Mere anarchy is loosed upon the world…

Achebe, who was educated in Nigeria by European teachers who focused on European history, literature and art, asserts through his title an African perspective on social disintegration and reminds us that colonial rivalries in Africa helped to create the conditions for World War I.

Things Fall Apart modelled an inspiring new Afrocentric literary sensibility, but it also laid the groundwork for several generations of African writers in a more practical sense. After the amazing loss and recovery of the manuscript, the novel was published by William Heinemann and was then republished in 1962 as the first in Heinemann’s African Writers Series, with Achebe as the series’ editor.

In celebration of Chinua Achebe’s life and literary achievement, take a look at these works by and about him.

“We cannot trample upon the humanity of others without devaluing our own.” — From The Education of a British-Protected Child

“If you don’t like someone’s story, write your own.” — From an interview with The Paris Review