When the discipline of English was formed in the 19th century, to promote a sense of national belonging, literary studies were organized along national lines. Literature in English meant, first and foremost, literature by English writers. The rise of American studies in the mid 20th century, along with similar shifts in Canadian and Australian literature, strengthened the influence of England’s former colonies. In the second half of the 20th century, in tandem with African independence movements, pan-Africanist politics and post-colonial studies, a “new” body of literature was created: African literature, written both in indigenous languages and colonial languages like English. Today, the works studied in English departments come from Americans, Brits, Africans of many nationalities and a host of other Anglophone writers.

What did all this busy rearrangement of “English” literature mean to African writers? Without easy access to the major European and North American centers of publication, African writers often had difficulty finding publishers and reaching their readers. Their claims to literary authority were hampered. Enter, in 1962, the Heinemann African Writers Series. The founding editor was Chinua Achebe, whose ground-breaking novel Things Fall Apart was also No. 1 in the series. Dedicated to the fiction and poetry of contemporary African authors, the series has provided a platform for writers who have become international figures, like Ama Ata Aidoo, Buchi Emecheta, Nadine Gordimer, Bessie Head and Ngugi wa Thiong’o. Most of the works in the series are written in English, but it also includes English translations of works written in French, Portuguese, Zulu, Swahili, Acoli, Sesotho, Afrikaans, Luganda and Arabic.

The library has many of the books in the African Writers Series in print; now we have obtained the entire series as a digital collection. As e-books, the works are available to multiple users at the same time. Students and researchers will also find it easier to get to out-of-print titles, compare texts and search within them.

Olabode Ibironke, Andrew W. Mellon Postdoctoral Fellow in English, can testify to the importance of the African Writers Series—he has written extensively about its cultural impact and relies on it in the courses he teaches. Ibironke notes, “The acquisition of the African Writers Series database has provided the necessary lifeline for my research. The Series represents one of Africa’s proudest cultural achievements. My Spring 2011 course on ‘The Imprisonment of the African Writer from Mandela to Present’ has just been made possible, as all the required texts which were out of print are now freely available to students. The new database will thus enable and promote teaching and research in African literature, cultures, politics, and history at Hopkins, with fresh vigor.” 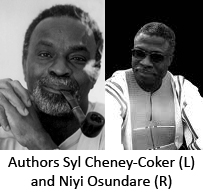 If you are interested in the works of contemporary African writers, check out Africa in Exile on October 7, a day of poetry workshops and readings by Niyi Osundare from Nigeria and Syl Cheney-Coker from Sierra Leone. (You’ll note that many of the works by Osundare and Cheney-Coker are on reserve for folks interested in participating in the event.)

The library also has a number of critical and reference sources that can help you start your own research on African literature. See, for example, The Cambridge History of African and Caribbean Literature, the Encyclopedia of Post-Colonial Literatures in English, and The Companion to African Literatures.