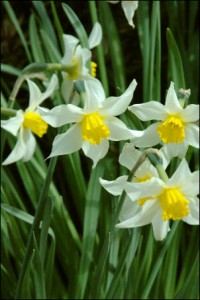 Daffodils — or affodills as they were once spelled – are the harbingers of spring. Their tips poke up out of the ground in late winter and wait for warmer weather to burst into bloom. Their yellow blossoms stand out against the brown earth or grassy fields and grab our attention. In our homes, a vase full of daffodils makes us smile and promises that warm temperatures are close at hand.

An important ancestor of modern daffodils is the Ajax Group, which originated in the Iberian Peninsula and was introduced to French, English, and Dutch gardens in the 16th century. Spanish researchers in the article, “The Origin of Cultivation and Wild Ancestors of Daffodils (Narcissus subgenus Ajax) (Amaryllidaceae) from an Analysis of Early Illustrations” describe the methods they used to identify and explain how these early cultivars were introduced into cultivation and domestication. This is one of many articles about daffodils in the journal Scientia Horticultura. 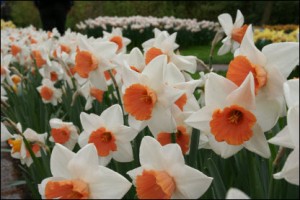 Poets and composers through the centuries have drawn inspiration from daffodils. Robert Herrick’s “To Daffodils” is a well-known poem. Both William Wordsworth and his sister Dorothy wrote poems about daffodils. He wrote “I wandered lonely as a cloud,” and she penned, “I never saw daffodils so beautiful.” Try a search in The Colombia Granger’s World of Poetry to explore the hundreds of poems about daffodils. 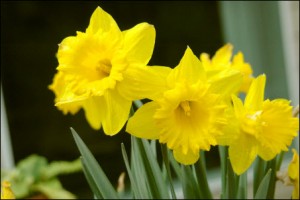 When it comes to music, it’s more difficult to find songs about the lovely flower. But the composer Benjamin Britten wrote a set of songs entitled “Five Flower Songs,” one of which is “To Daffodils.” And, there’s also a folk song, “Seven Daffodils.”

So when you witness the first daffodils beginning to bloom on campus, you may be inspired to recite Dorothy Wordsworth‘s poem, “I never saw daffodils so beautiful.”

I never saw daffodils so beautiful.
They grew among the mossy stones—
About and about them;
Some rested their heads upon these stones,
As on a pillow, for weariness;
And the rest tossed and reeled and danced,
And seemed
As if they verily laughed with the wind
That blew upon them over the lake.