Revolution – “…the overthrow or renunciation of one government or ruler and the substitution of another by the governed.”

Rebellion – “…usually unsuccessful defiance of or resistance to an established government.” 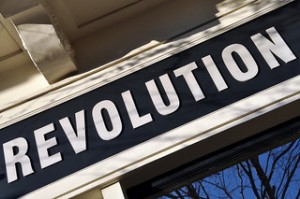 The Hunger Games is the recounting of the rebellion or revolution (I don’t want to give it away if you haven’t read the trilogy) of the districts of Panem against the government. Fiction has many examples of dystopias in which there is (or probably is) an eventual rebellion and/or revolution. Take, for example, The Handmaid’s Tale by Margaret Atwood or The Children of Men by P.D. James.

The “rebellion/revolution” stories are somewhat different from those in which one or a few people escape but the dystopian society doesn’t change. Examples from that genre include (spoilers ahead):

If you’re feeling rebellious, here are three amazing books about people who realize that the existing way of life is not good for the citizens.

Tell us your favorite fictional stories about rebellion and revolution!

2 thoughts on “Rebellion and Revolution”