Fun & Fascinating Databases to Wake Up Your Mind: Part I 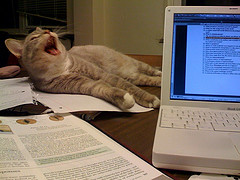 With school starting in just a week, you might be feeling somewhat rusty. Before you have to plunge headfirst into homework, take a little dip into some of our amazing databases to get your brain back in gear. The library website has a more than 900 grouped by subject, for your perusal.

If you want specific suggestions, here are some favorites:

African-American Poetry, 1760-1900. From the first recorded poem by an African American (Lucy Terry Prince’s ‘Bars Fight’, c.1746) to major poets of the nineteenth century. Lots of beautiful and insightful work.

American Civil War Letters and Diaries. Approximately 100,000 pages of diaries, letters and memoirs, such as the memoir of Union spy Orville Chester Brown. This may be the only way to really know how it felt to be caught up in these events.

American Film Scripts Online. Here’s the place to find the shooting script of “A Night at the Opera” or the continuity script of “Singin’ in the Rain.”

AP (Associated Press) Images. A sensory journey (eerie at times) of photographs, sound bites, graphics and text spanning over 160 years of history. How about a picture of the opening of “Gone With the Wind” in 1939? Or on-the-spot photos of the D-Day Invasion?

The Birds of North America Online. Sponsored by the renowned Cornell Lab of Ornithology, this is the ultimate guide for bird lovers with photos, essays, history, drawings, identification aids, and more. Here’s a photo and article about the controversial Ivory Billed Woodpecker.

Declassified Documents Reference System (DDRS). Full of fascinating material, such as a much-censored report about the doings of John Lennon and a transcript of a telephone conversation between Henry Kissinger and Frank Sinatra.

Early Encounters in North America: Peoples, Cultures and the Environment. Includes letters, diaries, memoirs, and accounts. This is a fascinating collection of transcripts containing everything from Christopher Columbus’ day-by-day account of his 1492 voyage to George Washington’s diary just prior to the French & Indian War.

Did we pique your interest? Then start browsing. And be sure to share your own favorites with us!

Stay tuned for Part II for more of our favorites!