Crime and the Victorian City 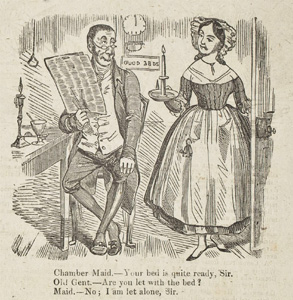 Last June, I wrote a blog post about the London Low Life database that our library had newly acquired. It is a great resource to learn about different kinds of crimes in Victorian London. I was delighted to learn that Jessica Clark, a graduate student in the Department of History, not only taught a class on “Crime and Victorian City” during the Intersession, but also used two of our databases – the London Low Life and 19th

Century British Library Newspapers as well as the Old Bailey, a free available online collection. I approached Jessica and her student, Shelby Hostager, asking them to share their experiences using our library resources for the class. Here they are in their own words!

Hopkins’ Intersession courses offer instructors a unique opportunity to incorporate MSEL’s online resources into the classroom. This past January, my own class relied upon the Library’s online materials to examine the social and cultural history of crime in Victorian London. Students in “Crime and the Victorian City” used criminal trial records and historical statistics to explore the ways that class, gender, and urban space were featured in historical experiences of crime and criminal justice. We supplemented historical materials with scholarly analyses (or secondary sources), which introduced to students the ways that Victorian social mores and ideological systems shaped the penal system.

Not only did we analyze traditional sources in the social history of crime, but we also paid close attention to the ways that Victorian print media depicted crime and criminality. Print media was central to the final assignment, which asked students to transform a real criminal trial into a Victorian print article that reflected a specific style of the day. Using examples from MSEL’s London Low Life and 19th Century British Library Newspapers, students first explored different forms of Victorian crime reporting: penny dreadfuls, illustrated news, chapbooks, and broadside ballads. Students then “reported” on a trial they selected from the Old Bailey Online, a free, fully searchable edition of almost 200,000 trial transcripts taken at London’s central criminal courts. Many students enthusiastically embraced the task and brought to life suspenseful tales of arsenic poisoning and deadly pub brawls. All the while, their print articles emphasized the ways that narrative or authorial voices shape historical sources and, subsequently, our understanding of the past.

Crime and the Victorian City was one of the most engaging and intriguing classes I’ve taken at Hopkins. I really enjoyed learning about Victorian crime – not only what sorts of crimes were committed, but where, by whom, and sometimes why. My favorite part was the final project, which involved using Old Bailey Online, a database of London crime from 1674-1913. The project was to choose a crime, research it, and then write an article about it in one of the styles of the Victorian era, examples of which could also be found on Old Bailey. I had fun searching through the database for the most interesting case I could find, and ended up writing a penny dreadful on a botched suicide pact involving poison. Even if that’s not your cup of tea, there are highwaymen, riots, and even petty thievery (months of jail time for stealing a plank, anyone?) to be found in the history of London’s crime.