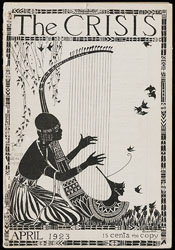 Where would the African-American community be today without the mass-market magazines that developed in the late nineteenth century? Through articles, stories, letters, opinion pieces, pictures and advertisements, inexpensive magazines gave African-American readers, writers, artists and businesses a brand new means of connecting with each other—and a new collective voice.

One of these magazines was The Crisis, the official organ of the NAACP. Founded in 1910 by W. E. B. DuBois, it is still in existence. Along with news and commentary, The Crisis in its early years was known for its poems, book reviews and historical and cultural essays. It bore the definitive stamp of DuBois’s intellect—he was the editor until 1934—with articles from an African-American perspective on World War I, women’s suffrage, lynching, segregation, educational reform, immigration, college football and all the critical issues of the day. Ads for schools, musical entertainments, hotels, books, beauty products and insurance companies reveal the quotidian context in which these major historical developments played out.

As a vehicle for catalyzing a sense of African-American community, The Crisis was a crucial player in the growth of the African-American literary tradition. Between 1919 and 1926, Jessie Fauset was the literary editor; she championed the “new negro” movement known as the Harlem Renaissance. She herself wrote one of the most important novels about the phenomenon of racial passing, Plum Bun, in 1929. The community conversation about literature that The Crisis generated has been widely recognized by critics; see, for example, The Cambridge Companion to the Harlem Renaissance.

The library provides access to The Crisis in a variety of forms: recent issues are available electronically, older issues are available in print and microform, and we even have some of the earliest issues in print in special collections—so you can experience this historic magazine the way its first readers did. You can also examine covers and some content selections via the magazine’s archive at Google Books.

Since 1987, The Crisis has been published in Baltimore!

One thought on “The Crisis!”