Why do we read poetry?

Thank you! Over 60 poems were suggested for the Eisenhower Library’s “pocket poems” created for National Poetry Month. A few dozen of the proposed poems will be available in the library starting today. Pick them up at Café Q, at the Charles Street entrance, and at other locations on M, A, B, C and D levels. 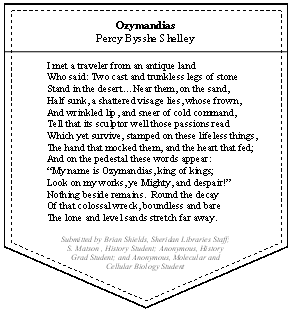 So why do we read poetry? Your suggestions provide some interesting clues. The most frequently suggested verse was “If,” Rudyard Kipling’s 1910 paean to perseverance. Inspired by a battle that eventually led to the Boer War, it begins:

If you can keep your head when all about you
Are losing theirs and blaming it on you;
If you can trust yourself when all men doubt you,
But make allowance for their doubting too…

And ends with a rousing promise:

Yours is the Earth and everything that’s in it,
And—which is more—you’ll be a Man, my son!

Well, maybe not, but it’s a jolly good ride. And it offers readers a very visceral feeling of vigor–something we all need during the final weeks of the semester. (The whole thing is too long for a pocket poem, but you can read it here.)

What else did you suggest? Read on!

Several people recommended Percy Shelley’s “Ozymandias,” a sonnet which reports a traveler’s encounter with the “colossal wreck” of a king’s statue in the desert. Nothing more is said; we are left to complete his tale with our own meditations on power, time and worldly achievement. It’s quite different from Kipling! But perhaps those who love this poem love the way it puts success–and failure–into perspective.

Other favorites: Walt Whitman, Emily Dickinson, Wallace Stevens, e. e. cummings, Ralph Waldo Emerson and Edgar Allan Poe. Doubtless, these authors came to the fore because they published before 1923, our cut-off date for copyright reasons. At the same time, these are the American poets that many Americans read in school, or read for the first time when we were young. That these poets and their words continue to feel personal testifies to the extraordinary ability of a national literature to shape its reader-residents.

Nevertheless, the writer most frequently suggested was the Irishman William Butler Yeats, with poems ranging from the ominous “Second Coming” to the sweet love song “Brown Penny.” Over the course of his long career, Yeats (1865-1936) made a poem for nearly every mood and taste, in a variety of voices and styles.  Perhaps we read poetry precisely for this range–for the way it stretches us, catalyzing thoughts and feelings we could not reach otherwise.

Our date and length restrictions affected the selection of pocket poems. We had to leave out some of your favorites by the many modern writers who have broadened our poetic paradigms. In the spirit of inclusion, here’s a poem by Lucille Clifton, the Poet Laureate of Maryland from 1979 to 1985, who died earlier this year. It’s the first poem from her first book, Good Times, published in 1969: