What can you learn from the objects in your home? At Johns Hopkins University’s Homewood Museum, the staff works every day to understand the objects in the museum’s collection and learn the stories they can tell us. 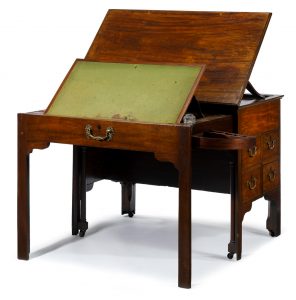 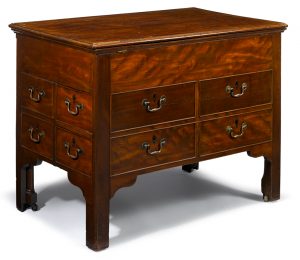 One object at Homewood that has received significant attention of late is an architect’s desk that has a history of having been in the Carroll family. Originally from Ireland, the Carrolls sought sanctuary in the colony of Maryland in the seventeenth century to freely practice their Catholic religion. The Carrolls quickly became wealthy landowners in Maryland history, accruing their wealth through the labor of enslaved people. Charles Carroll of Carrollton (1737-1832) was an avid supporter of American independence and a Maryland signer of the Declaration of Independence. His son, Charles Carroll of Homewood (1775-1825), was the original owner of what is now Homewood Museum.

Today, Homewood boasts a fine collection of early nineteenth-century furniture in which the mid-eighteenth-century desk stands out. It’s stylistically earlier than the rest of the house and the metamorphic quality of the object has captured the attention of many visitors. The front drawer can be pulled forward and the writing surface can be lifted up to create a forty-five degree writing surface making it easy for drafting. Meanwhile, all along the sides and back of the desk are fake drawer fronts with brasses. The deceptive appearance of the object prompted Homewood staff to dig deeper into the object’s origins.

The architect’s desk, as it is known, came into our collection after a uniquely trans-Atlantic life. Irish-born Daniel Foley was an early twentieth-century neighbor of the Carrolls. His summer estate, Enniscorthy, was near Doughoregan Manor, the Carroll family's ancestral seat in Howard County. While living there, Foley purchased the desk from the Carroll family. He then returned to his home in Ireland, also called Enniscorthy, a 16th-century castle in County Wexford. His niece Josephine Shriver also moved to Ireland with him, and eventually she and her husband purchased Enniscorthy from him. Apart from a brief sojourn back to Maryland in the 1970s for an exhibition on the Carrolls at the Baltimore Museum of Art, the desk appears to have spent much of the 20th century in Ireland. It made its final trip back to the states with a family descendant toward the end of the 20th century. Finally, in 2012, the desk was purchased by Homewood Museum at auction, with its Carroll family history still intact.

However, by looking at the desk a little more closely we suspect it made at least one more trans-Atlantic journey early on in its life. When considering where it was originally made, we began by searching the inventories of Carroll family members who lived through the second-half of the eighteenth century, presumably when the architect’s desk would have entered the family. Not finding anything in the family inventories labeled as an “architect’s desk,” we did some research into cabinetmaker’s pattern books to learn more about the form itself. We found that the object was commonly referred to as a writing or drawing table, but could occasionally also be called a desk. This was vague, but opened the possibility that the object is mentioned in early Carroll inventories. From this, we also learned that this furniture form was not exclusively used by architects, contrary to what the current terminology for the form implies. 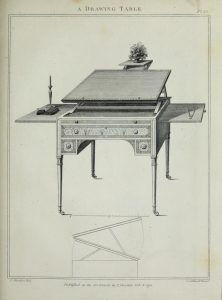 Next, we looked at the object itself and considered what its features and form  tell us. The object does not resemble anything produced in Maryland in the eighteenth century, where there are few examples of pieces with the amount of false drawers that see you around the desk case. Adding false drawers was a common practice in Europe, though. While it is possible that the desk is Irish due to similarities between its brackets and those found on other Irish antiques, the Carroll family's purchasing habits persuade us otherwise. Even though the Carrolls were of Irish extraction, they frequently bought English goods, as was the fashion among their social set. There is evidence of a high variety of forms like Homewood's architect's desk produced throughout England by famed firms like Gillows of Lancaster and London and cabinetmaker Thomas Chippendale. In order to learn more about where our desk came from, including identifying a region of origin, we continue to scour English and Irish collections to find objects with similar details. 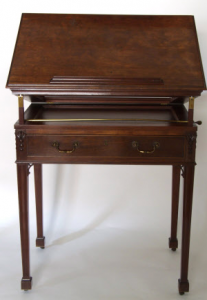 Why so much fuss over one piece of furniture in the collection? The question of whether the desk is English or Irish speaks to the eighteenth-century Carrolls’ concept of their own material identity: Did they stick to their Irish roots when picking out a writing desk or did they follow the example of their peers and buy luxury goods from England? By looking into the desk's twentieth-century history, we also can learn more about the dispersal of Carroll family objects over time and the social network of the early twentieth-century Maryland Carrolls. Studying this desk also reminds us of the multitude of forms that can be associated with the word “table” or “desk” in the historic consumer market. By learning from the desk, we can learn more about the life and world of the residents of Homewood.