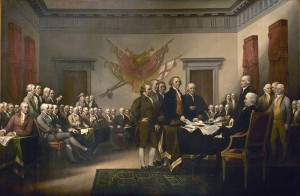 So how much do you know about the Declaration of Independence? I am sure you could tell me who wrote it. And you know it is associated with July 4th, 1776 and the Revolutionary War. And names like Benjamin Franklin, Thomas Jefferson, and John Adams come to mind. But what else do you know? The Declaration of Independence was written after Richard Henry Lee from Virginia 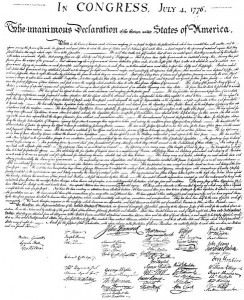 proposed a resolution to the Second Continental Congress that the colonies declare independence from Britain. There was actually a five man committee commissioned to write the document. The members were Roger Sherman from Connecticut, John Adams from Massachusetts, Robert Livingston from New York, Benjamin Franklin from Pennsylvania and Thomas Jefferson from Virginia. Jefferson did pen most of the document but the others were involved. And the Congress made some revisions before the document was accepted. The resolution was passed on July 2nd with the Declaration being accepted on July 4th. It took until August to collect all the signatures as they are now. There is an interesting connection between the Declaration of Independence and Johns Hopkins University Homewood Campus. The Homewood Museum was actually built by one of the signers' children. Charles Carroll of Carrollton gave his son and daughter-in-law the money which was used to build the house. Carroll was an interesting individual in his own right. He was the only Catholic to sign the Declaration and he lived the longest; he survived until 1832. If you are interested in more information on the Declaration of Independence, you can always go see the document at the National Archives or visit Independence Hall in Philadelphia where it was signed. Or if you are looking for something a little more on the theatrical side you could watch the movie, "John Adams" or  "The Patriot." Both are based partially on historical fact. And a little history now and then can be fun. Just be sure to pick them up before July 4th because the Milton S. Eisenhower Library and the Brody Learning Commons are going to be closed that day.