This impassioned declaration was part of the story of Kathy S., a Baltimore woman who wrote about her experience getting an abortion in a 1972 issue of the Baltimore Women’s Liberation newsletter. Her abortion was an awakening for her, the beginning of the rest of her life, but in the decades before Roe v. Wade, abortion had different meanings for different people in Baltimore. This summer, I set out to uncover how women in Baltimore accessed abortion care before it was legalized nationwide, and how physicians influenced that care.

I’m Tiffany Brocke, a rising second year Johns Hopkins medical student. I’m writing this history of abortion in Baltimore between 1945 and 1973 as part of a Scholarly Concentration in the History of Medicine for fulfillment of my M.D. The Johns Hopkins Hospital being my new professional home, I wondered: How did “the Hopkins” create, challenge, or ignore issues in abortion access for white and African American Baltimore women?

I had curiosity, but I didn’t know what to do with it. Before 1973, when abortions went well they left little trace. Luckily for me, historians are good at finding traces. In addition to my mentors in the Department of History of Medicine (s/o to Drs. Mary Fissell and Graham Mooney!), I’ve had the pleasure of collaborating with archivists and activists from all over Baltimore. I work with collections in a different library every day – ten so far, including the Library of Congress, the Maryland State Archives, and the Alan Mason Chesney Medical Archives right here at Hopkins. Books of legal code, underground newspapers, medical journals, meeting minutes, speeches, memos – you name it, I’ve read it.

I’ll admit, I was not expecting to have quite as much fun doing this research as I have been. But picture this: you want answers, and – unprecedented – Google has nothing for you. So you start digging. You have to get creative in thinking about who might have been a stakeholder in the issue. You have to send emails, track down where those stakeholders sent their records when they retired fifty years ago. You get to meet new people, lean on their expertise, leaf through boxes of the day-to-day goings-on of people who lived and loved more than fifty years ago. And then, amazing! Treasures like this, from a speech by Irvin Cushner, a Hopkins obstetrician/gynecologist:

“In the department of obstetrics at the Johns Hopkins Hospital, during the 1950s and early 1960s, the annual number of abortions performed ranged between zero and four. Yet it was well-known that, while small numbers of abortions were being done in hospitals on predominantly upper- and middle-class patients with few deaths, large numbers of abortions were being done in clandestine, out of hospital facilities on predominantly middle- or lower-class patients, with many deaths.” 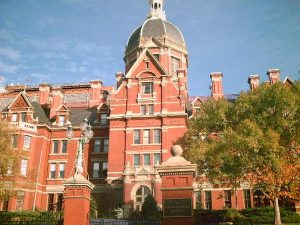 Before, we knew nothing; suddenly now, we know that a few women could access safe hospital abortions during the crackdown on abortion in the 1950s, but that many more women accessed unsafe abortions. Now we know there was a class divide, and using what else we know about the history of Baltimore, we can propose that there may have been a racial divide as well, in which white women had better access to safe abortion care than African American women. Now we know that there was a gestalt understanding, at least among ob-gyns at Hopkins at the time, that these were problems. And now we know there were “many deaths,” and that means there will be records, so we need to track down annual reports from the Baltimore City Health Department, and maybe some newspaper articles and obituaries, and maybe inquests from the Office of the Chief Medical
Examiner. So much to be done! See how much fun this is?

None of this would be possible without the support of the Hugh Hawkins Research Fellowships for the Study of Hopkins History. I hope that when completed, my project will shed light on an important piece of the long relationship between the Johns Hopkins Hospital and the larger Baltimore community. I hope too that it will offer examples of the power that physicians can exert to influence positive social change, and call upon doctors today to consider social justice within the purview of their practice. Finally, and most importantly, the history of abortion is a long series of tragedies and triumphs. I hope that this story can honor some of the women who worked, cried, bled, and died in search of reproductive health care in Baltimore.

Interested in applying for a Summer 2018 Hugh Hawkins fellowship? Watch for our announcement of the application deadline this fall, and read more about the program here.