Snowflakes keep falling on my head… 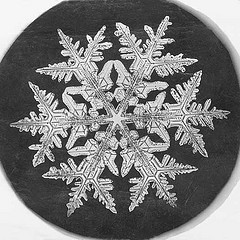 While I know those are not quite the lyrics for that song, I can’t help but want to twist the words around slightly this time of year, particularly when the sky is gray and hats, gloves, and wooly socks are necessary. Even with the rigor of the semester ending, it is hard not to be on the lookout for that first, exciting snowflake of the season. However, that simple, beautiful, delicate little snowflake is actually quite a spectacular bit of science.

Snowflakes have fascinated scientists for a long time. In 1611, Johannes Kepler wrote, “Now Socrates has to say how far a flea can jump. Our question is, why snowflakes in their first falling, before they are entangled in larger plumes, always fall with six corners and with six rods, tufted like feathers.” To read more of Kepler’s pondering on snowflakes check out his Vom sechseckigen Schnee: Strena seu de Nive sexangula, or, if your German is not up to par, you might enjoy the very short but page turning 1966 English translation. 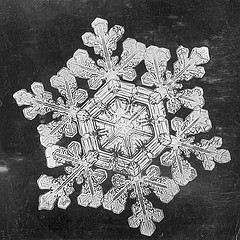 Snowflakes start as supercooled cloud droplets. Those droplets freeze and as they move through different humidity and temperatures they develop their unique shapes. Most snowflakes exhibit a six-fold radial symmetry, with each arm of the crystal structure growing separately. Most snowflakes are not perfectly symmetrical because of the number of variables that change as they make their way through the atmosphere.

Probably one of the most well-known snowflake researchers in the U.S. was Wilson “Snowflake” Bentley. Bentley photographed thousands of individual snowflakes and was the man to declare that no two snowflakes were the same. Check out the beautiful pictures of snowflakes in the classic book Snow Crystals. To read more about Bentley, his biography by Duncan Blancard provides insight into Bentley’s singular passion for snowflakes.

Inspired by Bentley, Ukichiro Nakaya, a Japanese physicist and glaciologist called snowflakes “letters sent from heaven.” He went on to study snow crystals and produced over 3,000 photomicrographs  by which he established a classification of natural snow crystals. Snowflakes and snow crystal formation continue to be an active field of study. To learn about the latest research do a search in General Science database for full text articles on snowflakes or search the library catalog. 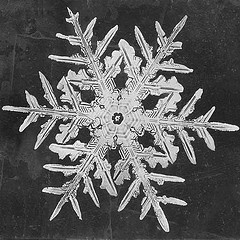 Snowflakes are also a traditional symbol for winter and wintery conditions. I know every winter I always watch White Christmas and sing along with Bing Crosby, Danny Kaye, Rosemary Clooney, and Vera-Ellen as they extoll the virtues of snow. However, as winter wears on keep in mind the words of native Baltimore singer, Frank Zappa, “…watch out where the huskies go and don’t you eat that yellow snow.”