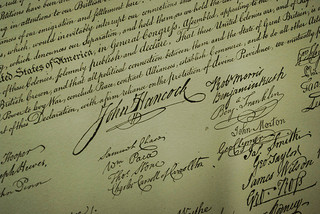 Did you ever wonder why signatures and autographs carry the enormous weight they do? The history of this fancy of finger-work, this veritable cult of calligraphy is long and varied. Ever since humans fixed words to a medium, signatures of some sort have existed. Residents of the Arabian peninsula used cylinder seals to authenticate, certify, and witness a variety of legal documents thousands of years before the common era.

Western tradition perpetuated the use of seals as a means of authenticating documents (it didn’t hurt that the seals brought with them a good deal of gravitas). The use of matrices and signet rings to imprint a seal on hot wax served to show both the authority and the authenticity of the accompanying document.

Although the use of manuscript signatures and writing to convey authority existed much farther back, it wasn’t until the spread of education and literacy (greatly impacted by the developments in the world of printing) that signatures alone were widely accepted as valid certification. Early modern Europe, along with its increased industry and business transactions, saw the growth of legal contracts and the increased need for legal authentication.

As signatures became widely seen as signs of presence and authority, they inevitably became objects of desire as well, and were collected and valued for their connection with notable people. Autograph collecting became a popular phenomenon. From movie stars to sports legends, autographs became both a symbol of a personal experience with the famous as well as something with its own inherent value. 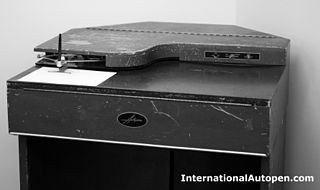 As the train of technology ever chugs along, innovations in authentication continue to develop. Perhaps one of the most well known examples is the autopen and its use by US Presidents. The autopen is a mechanical device that records the manner in which a person signs his or her name, and then replicates that automatically. Harry Truman is thought to be the first President to use the autopen, although Gerald Ford was the first to openly acknowledge doing so. Presidents, politicians, and many others have employed the device ever since.

In today’s world, manuscript signatures are still widely acknowledged, accepted, and even required, but far more often (sometimes without even realizing it) we are signing things electronically. There are many means used to authenticate and certify identity and acknowledgment online, and just as forgery in the manuscript world was an ever present threat, so too is the threat of cyber-forgery. One wonders if and how electronic signatures might become collectibles in the future!