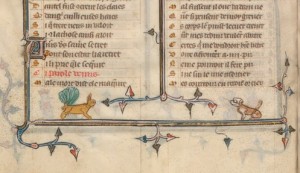 Have you ever been warned by a teacher or librarian not to write in books? Rather than being harmful, it turns out that marginalia can often provide rich insight into the way readers have interacted with a book. They can even be the stuff of poetry. Baltimore’s own Edgar Allan Poe wrote, “I have always been solicitous of an ample margin; this is not so much through any love of the thing in itself, however agreeable, as for the facility it affords me of penciling in suggested thoughts, agreements, and differences of opinion, or brief critical comments in general.”

Marginalia can be more than just text–it often consists of drawings or other doodles. The medieval period seems to be especially rich in unusual marginalia. You can find many examples of animals or humans doing odd things. Our own Roman de la Rose Digital Library has many interesting examples including a nun harvesting from a penis tree and a dog wearing a Dominican habit followed by other dogs with the caption “veni mecum” or “follow me”. On page 483 of his article in Speculum, Timothy Stinson tells us that the Dominican dog is a visual version of a pun “Domini canes” or “dogs of God”.

Famous writers such as Herman Melville and John Keats were prolific creators of marginalia. This record of the reader experience can highlight areas of interest or dissent. Mark Twain, for example, could get downright nasty in his appraisal of the works of others. Samuel Beckett’s cartoons and doodles in his manuscripts may shed light on his creative process. At the very least, it is humorous. For some writers, marginalia has become a creative expression on its own.

Hang on to those books that you are marking up for your classes–they may be valuable primary research material for some future scholar. But one word of warning: don’t create marginalia in any library books. You may end up with a nasty curse!