We are sad to announce the passing of R. Champlin “Champ” Sheridan, a member of the university’s class of 1952, trustee emeritus, 2007 recipient of an honorary doctorate of humane letters, and generous benefactor to the university and to the libraries that today bear his name. He died on August 7 at VNA Hospice House in Vero Beach, Florida. 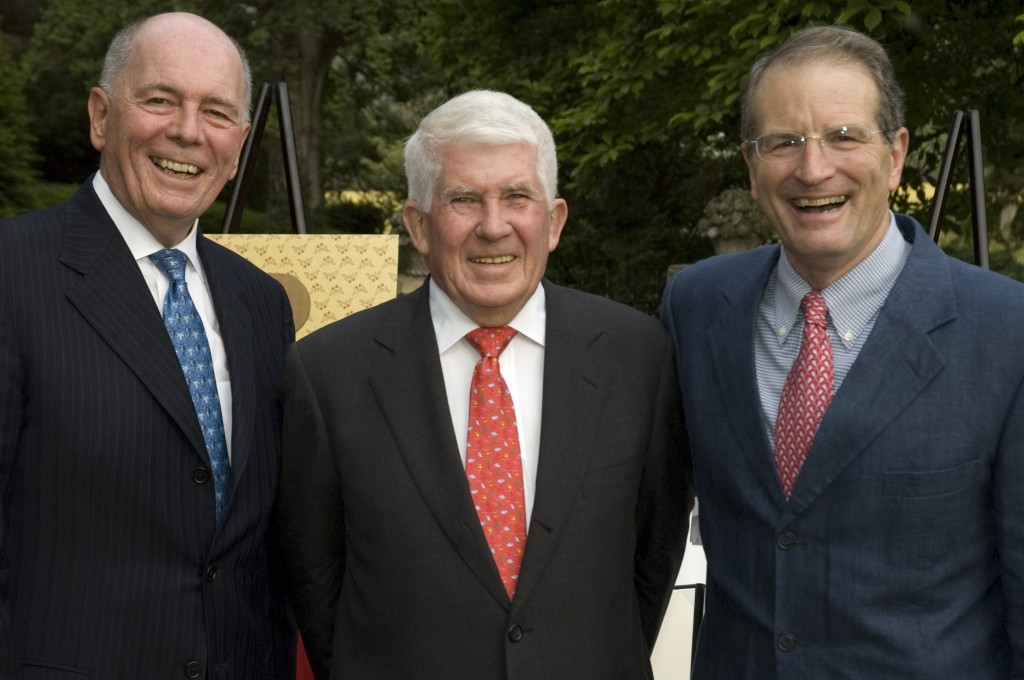 Champ, along with his wife, Debbie, became a major philanthropic supporter of Johns Hopkins University’s libraries in part because of what he called “sort of a natural affinity” for the printed word.

In 1990 the Sheridans pledged $2.5 million, in part to endow the directorship of the Milton S. Eisenhower Library. In 1994, they made a $20 million commitment to nearly double the Eisenhower Library’s endowment and support renovations. 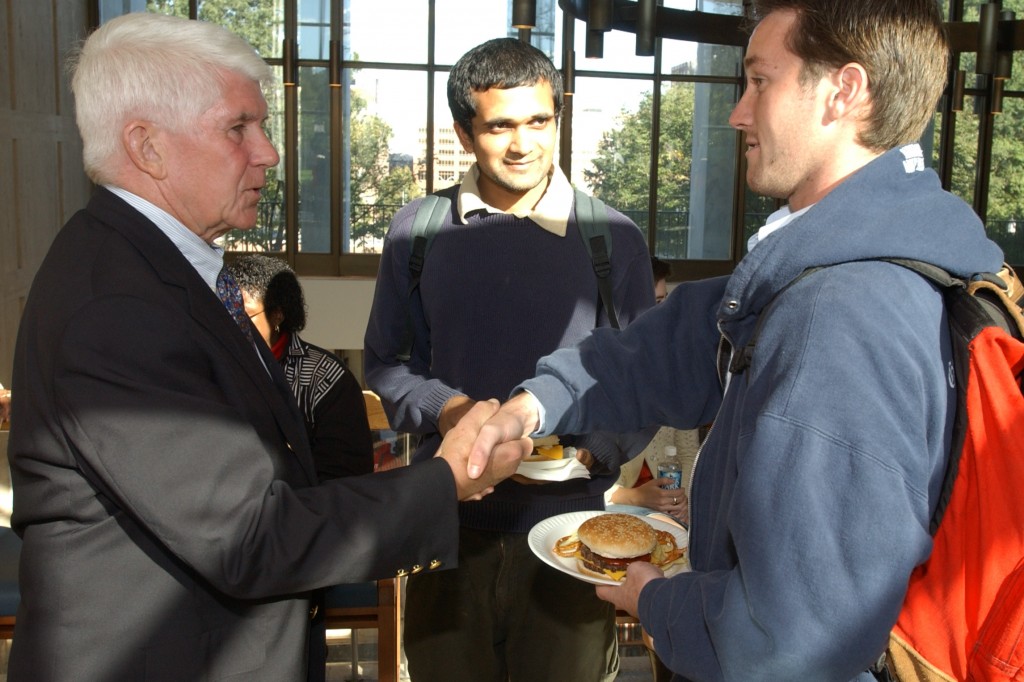 The university honored the Sheridans in 1998 by collectively rechristening as “The Sheridan Libraries” the Eisenhower Library and its collections at the Albert D. Hutzler Reading Room, the John Work Garrett Library at Evergreen Museum & Library and the George Peabody Library. (The Brody Learning Commons has since been added to the family of Sheridan Libraries.) For the unveiling of their portrait in the Eisenhower Library, the Sheridans and their beloved dog, Kermit, hosted a barbecue on the Beach for the students. 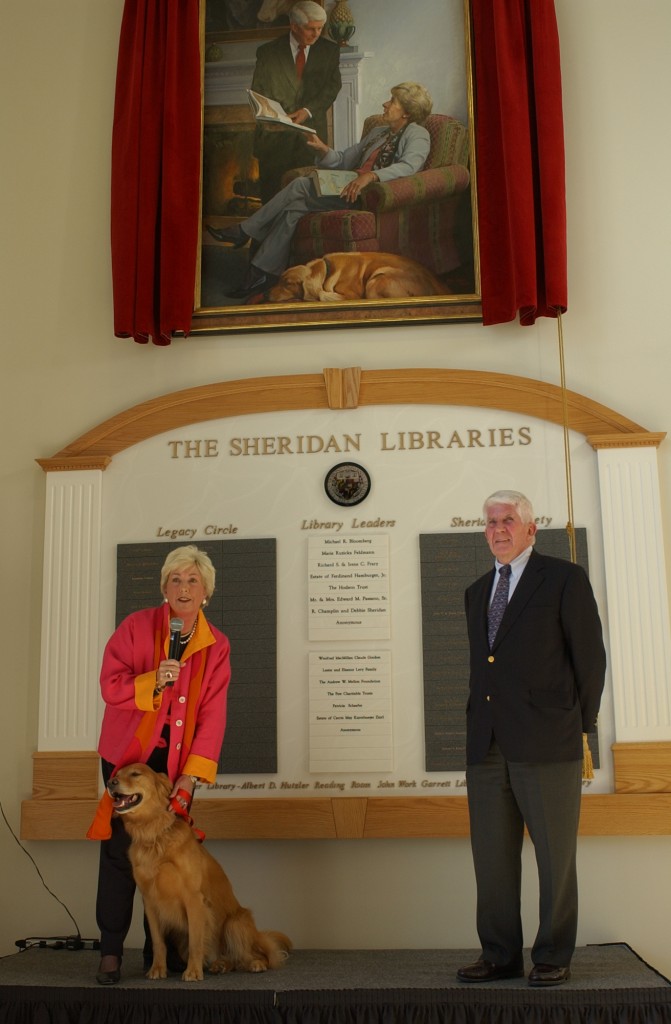 The Baltimore-born son of a printer, he attended Friends School and then Johns Hopkins University before military service during the Korean War. He returned to the city to work for his father, then the president and part-owner of Schneidereith and Sons Inc.

In 1961, wanting to move ahead in his career but not compete directly with his father, Sheridan moved to Hanover, Pa., as production manager, and then general manager, of Everybody’s Poultry Magazine Publishing Co., a small publisher and commercial printer. In 1967, he scraped together $1,000, “all the cash I had,” he later said. He bought the business from his two retiring bosses and set about making it grow.

By 1987, he was ready for a new challenge and purchased a competitor, Braun-Brumfield Inc. of Ann Arbor, Mich. He combined it with what was, by then, The Sheridan Press to form The Sheridan Group. Today, that Hunt Valley, Md., company comprises five subsidiaries in Pennsylvania, Vermont, New Hampshire, Maine and Michigan. It specializes in scientific, technical, medical, and scholarly journals; scholarly books; trade and special interest magazines; commercial catalogs; publishing services; and printing technology.

“Champ Sheridan was a remarkable man, and I am grateful to have been a part of his life,” said Winston Tabb, Sheridan Dean of University Libraries and Museums. “His legacy of generosity and his genuine concern for the students of Johns Hopkins University will endure, through the libraries that bear his name and through the achievements of those whose work and research he helped fuel.”

“Champ and Debbie truly transformed the libraries at Johns Hopkins through their immensely generous, multiple gifts,” Tabb said. “Scholars for generations to come will benefit from their generosity. I will miss Champ’s wit and candor, his advice, and his friendship; and I will always treasure the humble way in which he carried out what he characterized as his responsibility to repay, in his words, the ‘kindness, love, and generosity’ he had received as a student.”

Champ leaves behind a legacy of philanthropy across Johns Hopkins University, with support for the schools of Arts and Sciences, Medicine, Nursing, and Public Health, as well as The Johns Hopkins Hospital, and the Johns Hopkins University Press. After purchasing a home in the Vero Beach area of Florida in 2002, the Sheridans also became important benefactors of the Indian River Medical Center Foundation, becoming in 2005 the first million-dollar donors to its $50 million campaign. A new surgical intensive care unit named in their honor opened at the hospital earlier this year.

A memorial service will be held on Monday, Aug. 12, at 1 p.m. at Christ by the Sea United Methodist Church, 3755 Highway A1A, Vero Beach Fla. 32963. A reception will follow at Orchid Island Golf and Beach Club.