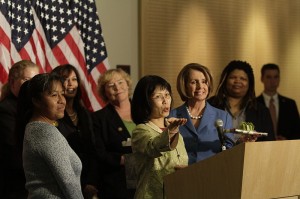 Aside from being a herald of spring, March is also Women’s History Month. As March 2013 comes to a close, let’s take a minute to reflect on the important contributions women make.

While there’s a lot of research and scholarship to be done on the women of the past—for example, not too many people are aware of a little known thirteenth century female troubadour named Guillelma de Rosers—I started thinking about all the great women who are making history right now! How many of the following women have you heard of?

How’d you do? These women include major government officials, Senators, Congresswomen, Nobel Prize Winners, MacArthur Fellows, and Gold Medalist Olympians! If you’re interested in more biographical information on famous women (or men, for that matter), try the Biography in Context database. That database led me to a citation for this fascinating article I located through the library’s excellent Find It software: “The Most Powerful Women You’ve Never Heard Of.”

So, what is happening with women in the world today? Where to begin? Why not with the library’s spiffy Political Science Resource Guide or the equally spiffy Women, Gender and Sexuality Resource Guide? You can access the 2010 Census Brief, Age and Sex Composition: 2010 where you’ll learn that out of a total US population of 308,745,538, 50.8% or 156,964,212 are women.

Need more? What about the Bureau of Labor Statistics! This chart, “Wives who earn more than their husbands, 1987–2011,” certainly gave me some food for thought. Want something else intriguing? See the Bureau’s “Labor Force Participation Rates among Mothers,” “Educational Attainment of Women in the Labor Force, 1970–2010” and “Women at Work.” Interested in learning more about women and employment? Check out this search for recent articles from the Gender Studies Database.

If you’re feeling like some books, try a new acquisition to the library’s collection: The Equality Illusion: The Truth about Women and Men Today by Kat Banyard. Wondering about where women are going in business today? How about the New CEOs by Richard L. Zweigenhaft? Curious about women in government? There’s Women and Representation in Local Government by Barbara Pini. Or maybe you’d like to read an e-book about female athletes! We’ve got Women and Sports in the United States: A Documentary Reader and Level Playing Field for All?

Want a bit more history and a bit more animation? Check out this video full of interesting facts and tributes to working women throughout history.

And, for even more great resources on women’s history, check out our past posts on the subject!