Got Classification? “Dewey Ever!”

From ancient times, there have been attempts to sort collections of texts and to create classifications for collected information. The earliest known archives and libraries were discovered in Ugarit with clay tablets covered in cuneiform writing. 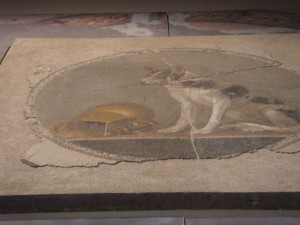 Some great libraries were irremediably lost, like the famous ancient Library of Alexandria in Egypt. Part of the Alexandria Museum that flourished during the Ptolemaic Dynasty, it supposedly had the largest collection of manuscripts in the world and was a great center of learning. Unfortunately, it disappeared in a fire during the siege of the city in 48 BC and persists in our collective memory only through some archaeological remnants and ancient descriptions. This ancient drawing (right) was excavated under the site of the new Bibliotheca Alexandrina. Located near the supposed emplacement of the ancient library, it was built with the intention of re-creating a library of similar ambitious dimensions, fit for the twenty-first century.  (It includes a digital collection donated by the Internet Archive.)

Some libraries are beyond virtual, they are whole imagined worlds by themselves. Jorge Luis Borges described, in his short story La biblioteca de Babel, an imaginary library that encompassed the entire universe.

The library of Babel being composed of all possible permutations of a basic alphabet, its librarians were in search of an ideal index that should exist somewhere on its multiple shelves and would include all of the library’s contents.

This need for some kind of classification has generated cataloging systems in the real world. Roger Chartier describes, in L’ordre des livres (our library has an English translation of this great read), the various systems people thought of through the centuries to get their texts in some kind of order. From architectural spaces whose owners hoped to fill with every book written, to compilations of works by categories and catalogues listing all the works in a library, libraries evolved along with the relationship of readers to books. 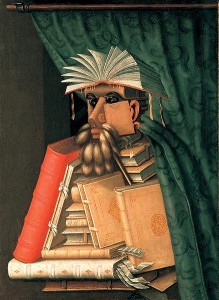 In the late nineteenth century, systems of classification appeared that would be used largely by American libraries. The first one was created in 1876 by Melvil Dewey, whose Dewey Decimal System, or Dewey Decimal Classification (DDC), is a hierarchical and faceted system. It was followed in 1897 by the Library of Congress Classification system (LCC), devised by Herbert Putman, but most public and small academic libraries still use the DDC. Different systems are used in other countries, like India where the Colon Classification was devised by S. R. Ranganathan. In this country, Melvil Dewey is still an inspiring figure. Devoted to popular education, Dewey had been a lover of organization and simplification. (He supported the use of the metric system, for example.) He was an acting librarian in his college library in Amherst, and later became Chief Librarian at Columbia University. Concerned with the well-being of educators, he founded the Lake Placid Club of New York, later followed by one in Florida.

Is the DDC passé in our modern world? Not at all: one of Manhattan’s “boutique” hotels, the Library Hotel, was organized according to the Dewey Decimal Classification! And the idea created a copyright controversy, because the DDC’s rights belong to the Online Computer Library Center. So, while the classification itself is in the public domain, one should ask permission before opening a Library Café with a menu organized by DDC call numbers… A cup of 641.337 3, anyone?