Adventures of the General Jewish Encyclopedia

Looking into MSEL’s collections can lead you to travel across continents and to share incredible adventures. Editing and publishing books can become quite an endeavor when it meets history’s turmoil. Just take a look at the Algemeyne Entsiklopedye.

Di Algemeyne Entsiklopedye, translated as The General Encyclopedia, was conceived in 1930 “in order to commemorate the seventieth birthday of Simon Dubnov, the historian who first demonstrated the value of Russian Jewry as a topic of serious scholarly inquiry” (Trachtenberg, B., p. 287.)

The encyclopedia’s initial purpose was to give access to “the latest discoveries from fields such as history, demography, biology, economics and political science” (ibid. p. 285) to its Yiddish-speaking readers. Its ten initial volumes were to be about general knowledge, and a special volume, the “Yidn” supplement, was to be dedicated to Jewish culture. However, tumults in European history changed the fate of the encyclopedia as it forced its editors to flee across countries.

Raphael Abramowitz, pseudonym for Jewish activist Raphael Rein, was the chief editor for the ten first volumes (ibid. pp. 287-288). The encyclopedia was conceived in Berlin in 1930. However, the editors fled to Paris after Hitler’s 1933 appointment as Chancellor. 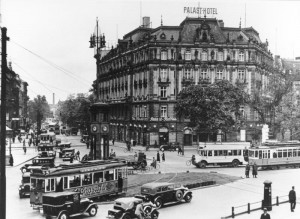 The first seven volumes were published there. Then the editors had to flee when the Germans invaded France in 1940. After they had seen their contributors scattered across Europe, after having had to regroup in Paris and look for funds again, they had to cross the Atlantic Ocean for safety. They fled to New York City with help from the Jewish Labour Committee and lost nearly all of their original copies of the Entsiklopedye during their trip when the shipment went down at sea, probably sunk by a German submarine (ibid. p. 293). The encyclopedia had to be reprinted in America, with its supplements.

Therefore, the final volumes of the encyclopedia were published in New York by CYCO. By the completion of its final volume in 1966, the Algemeyne Entsiklopedye included twelve volumes. Five of those were dedicated to general fields — called “Normale” by the authors — and the seven other volumes called “Yidn” were dedicated to the Jewish people (ibid. p. 287). The encyclopedia’s purpose shifted dramatically from bringing western scientific culture to Yiddish-speaking European Jews, to recording the history of the Jewish people and the extermination of most of the encyclopedia’s intended public.

Significantly, in 1946 CYCO began the publication of volumes in English, considered as part of the encyclopedia and titled The Jewish People, Past and Present. This would acquaint the English-speaking public with the culture of the European Jews who suffered annihilation by the Nazis and help preserve their memory (ibid. pp. 295-296).

And this is how the Algemeyne Entsiklopedye became more of a history book than a science book; its publication ending about twenty years after it started. If you’d like to research this topic further, consider using the library’s resource on the Jewish Studies Research Guide.