“Reduce, reuse, recycle”… such a 21st-century concept, isn’t it? A concept that the Hopkins’ Libraries embraces thoroughly, as you can see from our sustainability statement. Well, you might be surprised to know that the same concept prevailed in days of yore – and the palimpsest is evidence of that. From the Oxford English Dictionary, here is an abridged etymology and definition of this unusual word (for full definition, click on the link below):

palimpsest, n. [etymology: Classical Latin, paper or parchment which has been written on again; Hellenistic Greek, scraped again, also a parchment from which writing has been erased]  †1. Paper, parchment, or other writing material designed to be reusable after any writing on it has been erased.

And, why exactly am I bringing this up? Good question. The Walters Art Museum is launching a ground-breaking exhibition on one very important palimpsest that has been a hot topic around the world and locally – the Archimedes Palimpsest. This particular collection of scraped and reused parchment pages is interesting not so much for what it

currently is (a 13th-century prayer book), but for what it was. Before having its ink scraped off, the parchment included two treatises by Archimedes (of “eureka!” fame) that until its discovery couldn’t be found anywhere else: The Method and Stomachion. This amazing manuscript and the compelling story of the discovery of Archimedes’ lost words is the subject of an exhibition opening on October 16th that bridges technologies: the medieval technique to conserve paper and current technology to decipher lost and hidden text.

Please check out this amazing exhibition, entitled Lost & Found: The Secrets of Archimedes – it’s up until January. If this idea of palimpsests intrigues you, check out library materials on the subject. And, note that Johan Ludvig Heiberg, the scholar who discovered the Palimpsest, wrote a great deal about Classical antiquity and mathematics. You also might want to investigate the works of Archimedes for yourself. And, there are also cool YouTube clips about the Archimedes Palimpsest, including interviews with William Noel, the Walters Museum curator who has worked on this for many years. 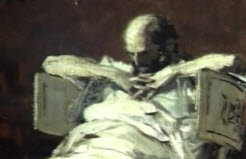 Hey, palimpsests and early manuscript production might make a great paper topic, right? If you think so, check out research tools in Medieval & Renaissance Studies, History of Science and Technology, History, or Museum Studies. You’re sure to find a lot of other great material on the topic!

While you’re in the Mount Vernon neighborhood seeing the Walters’s show, swing by the George Peabody Library to see a related exhibition entitled, “Eureka! Rare Books in the History of Scientific Discovery.”

One thought on “Palimpsest? What the heck is a Palimpsest???”