What canonical American author penned the following lines, and what is the story called? 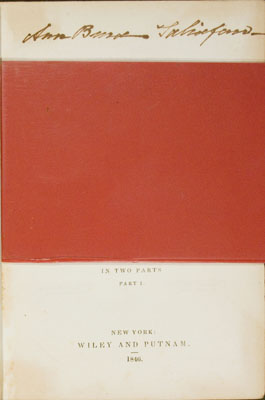 The other day, having a leisure hour at my disposal, I stept into a new museum, to which my notice was casually drawn by a small and unobtrusive sign: “TO BE SEEN HERE, A VIRTUOSO’S COLLECTION.” Such was the simple, yet not altogether unpromising announcement, that turned my steps aside, for a little while, from the sunny sidewalk of our principal thoroughfare. Mounting a somber stair-case, I pushed open a door at its summit, and found myself in the presence of a person, who mentioned the moderate sum that would entitle me to admittance:

“Three shillings, Massachusetts tenor,” said he; “no, I mean, half a dollar, as you reckon in these days.”

While searching in my pocket for the coin, I glanced at the door-keeper, the marked character and individuality of whose aspect encouraged me to expect something not quite in the ordinary way. He wore an old-fashioned great coat, much faded, within which his meager person was so completely enveloped that the rest of his attire was undistinguishable. But his visage was remarkably wind-flushed, sun-burnt, and weather-worn, and had a most unquiet, nervous, and apprehensive expression. It seemed as if this man had some all-important object in view, some point of deepest interest to be decided, some momentous question to ask, might he but hope for a reply. As it was evident, however, that I could have nothing to do with his private affairs, I passed through an open door-way, which admitted me into the extensive hall of the Museum.

Please send your entries to Gabrielle Dean. The deadline for submissions is Wednesday, October 5 at noon. The answer will be announced in the comments section of this post the following day!

One thought on “Name That Text”