January 19th marks the 202nd birthday of one of our most beloved national—and local—literary figures, Edgar Allan Poe.  Poe is as widely known today for his bad reputation (“alcoholic madman marries his 13-year-old cousin!”) as for his strange and fertile imagination.  Maybe it’s the combination of the two that inspires our devotion.  It’s tremendously moving that this man—who led a life of crushing financial disappointment; who suffered the loss of mother, brother and wife to tuberculosis; who was found delirious in a gutter in Baltimore in 1849, which occasioned his hospitalization and death a few days later; whose character was besmirched posthumously by a literary enemy—invented the character of the modern “scientific” detective; wrote one of the best-known American poems ever; and pioneered the kind of creative life that remains arduous and elusive today: a life in which a writer makes a living writing.  (Poe attempted it by working as a critic, editor, storyteller, amateur cryptologist, poet and plagiarizer of a conchology textbook.)  How do you square all that defeat with all that triumph? 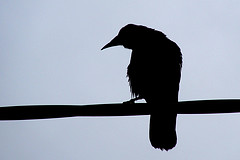 If you’re a curious Poe fan, start your research engine.  The library has a broad range of modern print and digital editions of works by Poe.  We also have a rich selection of Poe-related rare books and manuscripts.  Two collections in particular shed light on the ups and downs of Poe’s literary reception.   The Edgar Allan Poe Collection consists primarily of the records of the Edgar Allan Poe Society of Baltimore, founded in the 1920s by a Hopkins librarian and faculty member; it is a great indicator of how Poe’s reputation was rehabilitated by his 20th-century readers.  A new collection, the gift of the Meyer Family Fund in memory of former Hopkins trustee Peter Meyer, provides a first-hand look at how Poe was understood in his own time and in the first decades after his death.  It includes journals containing Poe poems and stories, pieces of printed ephemera (like single-sheet newspapers, which rarely survive), and early and unusual editions of Poe’s works.

The Meyer collection also demonstrates how publication practices in mid-nineteenth century America made it impossible for Poe to capitalize on the fabulous success of “The Raven.”  Poe published the poem in two periodicals almost simultaneously, The Evening Mirror and The American Review.  Wildly popular, “The Raven” was reprinted and imitated in a dozen publications throughout 1845 and 1846.  But Poe made very little money from “The Raven,” because American copyright laws did not at the time protect creative work as intellectual property, or ensure that writers received royalties.

Poe did get some mileage out of “The Raven”: its popularity helped him get some other work published, propelled him onto the lecture circuit and earned him a bit of celebrity.  He died a poor man but a famous one.   What other nineteenth-century American writer has a modern-day secret admirer who deposits a bottle of cognac at his gravesite on the anniversary of his birth?  (But the “Poe Toaster” did not appear in 2010… check the Sun to see if the ritual has returned this year…)

Poe’s most familiar work still casts a long shadow.  Getting spooked by “The Raven” has become an adolescent rite of passage, and it continues to motivate works of homage, parody and interpretation that go well beyond your average teen-age Goth phase.   Your “Raven” choices today include an uncanny “film” of Poe himself, a creepy Christopher Walken reading, and an amazing two-fer: an animation of the musical adaptation of the poem by the Alan Parsons Project.

Let us know about any spectacular versions of “The Raven” we’ve overlooked.

4 thoughts on “The Raven’s Shadow”