Of Women and Insects 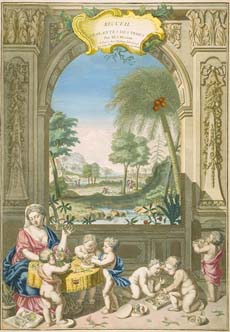 The George Peabody Library is fortunate to possess a beautifully illustrated copy of a 1771 edition of Maria Sibylla Merian’s work, titled Histoire generale des insectes de Surinam et de toute l’Europe, with text in both French and Latin, and including twelve illustrations not originally included in the first edition published by Merian in 1705. An examination of Merian’s breathtaking work provides a remarkable wealth of information related to early works of natural history, women in science and early modern women artists, as well as early travel and colonialism.

Maria Sibylla Merian was an amazing and accomplished woman. In 1699, fifty-two-year-old Merian set sail from Amsterdam for the Dutch colony of Suriname with her daughter Dorothea to study and paint insects, butterflies, and plants. Living in the seventeenth century, an age when most women lived their lives within the confines of either marriage or convent, Merian left her husband, joined a radical Protestant sect, traveled to South America with her daughter (and no male companions) to study plant and insect life. She published her studies upon her return in a work that would influence and shape the works of great eighteenth-century botanists and taxonomists such as Carl Linnaeus.

Like most early modern women artists, Merian was born into a family of artists. Merian’s father was an etcher and a book publisher, and as a young girl she learned painting from him. After he died and her mother remarried, Merian studied flower-painting from her step-father who was a still-life artist, and later married one of his proteges. In addition to her interest in painting, from a young age Merian had a deep-rooted interest in flowers and insects, often drawing them from nature. As a married woman, Merian collected insect eggs and caterpillars, fed them, and then recorded their appearances in each stage of their life cycle.

In 1685, Merian left her husband in Germany to join a radical Protestant group in the Netherlands, known 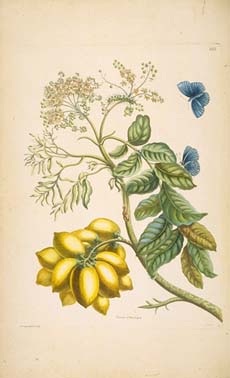 as the Labadists. It was there that Merian heard reports of missionaries who returned from South America and saw the collections of South American natural history specimens which they had brought back with them. Although Merian ultimately left the Labadists and moved to Amsterdam, her exposure to the returned missionaries inspired Merian’s own voyage to the Dutch colony of Suriname in 1699-1701. She traveled with her twenty-one-year-old daughter, with no male companions to protect them, and spent two years observing, drawing and collecting specimens of insect and plant life. In 1705, four years after her return to Amsterdam, Merian published the Metamorphosis Insectorum Surinamensis, which came out in Dutch (written by Merian) and in Latin, with sixty copperplate engravings. The original edition was available in black and white, or hand-colored by Merian. If you are interested in consulting Merian’s phenomenal text, come consult it at the George Peabody Library (open Tuesday through Friday 9am to 5pm, and Saturday mornings 9am to 1pm).