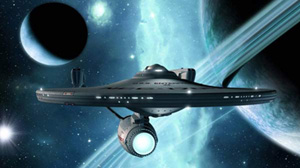 Trekkies rejoice! The final frontier is beaming down on our own backyard this evening, with the last screening in the Hopkins Summer Outdoor Films series.

Star Trek (2009) will begin at sundown on the Keyser Quad in front of Gilman Hall on the Homewood Campus (rain location: Shriver Hall Auditorium). Get there by 7:30 to enjoy eclectic local band The Swingin’ Swamis.

Though the film series may be drawing to a close, summer certainly isn’t! There’s still plenty of time to check out other great movies from our collection. You’ll be happy to know we own select episodes from the Star Trek television franchise. Or, if you’re really in for a marathon, browse our extensive collection of Sci Fi films.

And before you hit your next convention, brush up on your Star Trek trivia with our selection of written criticism and commentaries, including memoirs by actors William Shatner and Leonard Nimoy. Speaking of conventions—did you hear that Peter S. Beagle, acclaimed fantasy author and creator of the Sarek episode from Star Trek: The Next Generation, will be returning to Baltimore’s own Otakon this year?!

So go ahead: unleash your inner nerd…resistance is futile.