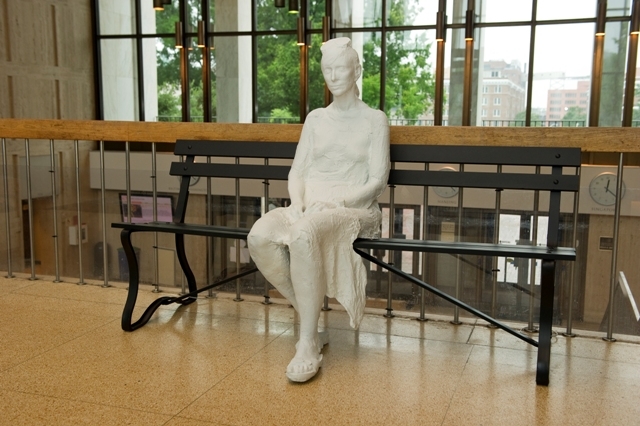 If you’ve been in the Eisenhower Library recently you may have noticed there’s a new guest on Q-Level. “Woman with Sunglasses on Bench,” by renowned sculptor George Segal (1924-2000), was installed last week. The sculpture was generously given to Johns Hopkins by an anonymous donor.

American artist George Segal is best known for casting human models in plaster-soaked bandages, which resulted in realistic ghost-like figures. He did not create memorials to specific individuals but rather decided early in his career to focus on the ordinary in life, like a woman sitting on a bench

As he was commissioned for outdoor sculptures, Segal needed to use more permanent materials and began to  work using bronze. He continued, however, to finish the figures in a white patina/paint that looked like plaster, as he did with “Woman with Sunglasses on Bench.”

Through the generosity of supporters like the one who gave this sculpture, Johns Hopkins University continues to grow its collections, enhancing the campuses of the university and adding to the growing resources of art and cultural properties that are woven into the academic life of the university.

One thought on “New to Q”