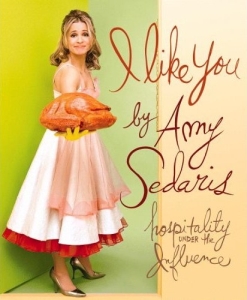 Don’t want to lug your Organic Chemistry textbook to the beach?
Tired of Statistical Fluid Mechanics … volumes 1 and 2?
That history of microloans in the Developing World isn’t a real page turner?
In other words, are you looking for an entertaining book to read during Spring Break?

The McNaughton Collection of Popular Fiction and Nonfiction is a great place to start. Shelved in the sitting area on M Level, the collection has something for everyone. You can browse for best-selling mysteries, graphic novels, biographies, science fiction, humor, and literary fiction.

Here are just a few of the McNaughton titles now available.

I Like You: Hospitality Under the Influence; by Amy Sedaris

“Sedaris’s sidesplitting guide to throwing parties hopes to return readers to the times when the word entertainment was “charmingly old-fashioned, like courtship or back alley abortions.” While her tongue is firmly in cheek, novice party-planners will actually find some helpful hints along the way as Sedaris offers instructions and real recipes. Her tips run the gamut from how to properly freeze meatballs (freeze them on a cookie sheet before putting them into a freezer bag so they won’t stick together) and deal with the inebriated (“Better to cut them off rather than pretend it’s not happening and then allow them to stay over and wet your bed”). She’s a generous but crafty hostess (“A good trick is to fill your medicine cabinet with marbles. Nothing announces a nosey guest better than an avalanche of marbles hitting a porcelain sink”). Etiquette pointers include inappropriate introductions (“This is Barbara, she can’t have children”) and things to avoid saying to the grieving (“Did she smoke?” “Was he drinking?” “Where were you when this happened?”). Her advice is both practical and hilarious; her instructions on removing vomit stains ends with “or just toss it, chances are you’ve stained it before.” Sedaris’s first solo effort (after Wigfield with her Strangers with Candy co-stars, as well as several plays with her brother, David) is an outrageous and deadpan delight, greatly enhanced by her deliriously kitschy illustrations and photos.” From Publishers Weekly

Audacity of Hope; by Barack Obama

“Why, just two years after being elected to the Senate, has Barack Obama set so many Democratic — and some Republican — imaginations on fire? The Illinois Democrat is certainly a magnetic speaker who delivers original phrases in composed yet passionate tones. His life, as told in the powerful memoir Dreams From My Father , seems a model for the globalized future: The only child of a biracial, bicontinental union, he grew up in Hawaii and Indonesia, then went on to become a community organizer in Chicago and the first black editor of the Harvard Law Review. And his athletic good looks have landed him on the cover of a major fashion magazine, with a spread by Annie Leibovitz. Not since John F. Kennedy has a junior senator so quickly become a national celebrity and a possible candidate for the White House. But what’s most impressive about Obama, 45, is an intelligence that his new book displays in abundance. He articulates a mode of liberalism that sounds both highly pragmatic and deeply moral. The Audacity of Hope — the title comes from a sermon by his Chicago pastor — trumpets no unifying theme or grand theory about how the American dream will be reclaimed and by whom. Chapters bear such prosaic titles as “Values,” “Opportunity” and “Faith.” But in a disarmingly modest way, Obama offers a more sensible perspective on “how we might begin the process of changing our politics and our civic life” than his more seasoned Capitol Hill colleagues have provided.” From The Washington Post

For One More Day; by Mitch Albom

“In this second novel from Tuesdays with Morrie and The Five People You Meet in Heaven author Albom, grief-stricken Charles “Chick” Benetto goes into an alcoholic tailspin when his always-attentive mother, Pauline, dies. Framed as an “as told to” story, Chick quickly narrates her funeral; his drink-fueled loss of savings, job (“sales”) and family; and his descent into loneliness and isolation. After a suicide attempt, Chick encounters Pauline’s ghost. Together, the two revisit Pauline’s travails raising her children alone after his father abandons them: she braves the town’s disapproval of her divorce and works at a beauty parlor, taking an extra job to put money aside for the children’s education. Pauline cringes at the heartache Chick inflicted as a demanding child, obnoxious teen and brusque, oblivious adult chasing the will-o’-the-wisp of a baseball career. Through their story, Albom foregrounds family sanctity, maternal self-sacrifice and the destructive power of personal ambition and male self-involvement. He wields pathos as if it were a Louisville Sluggerâ€”shoveling dirt into Pauline’s grave, Chick hears her spirit cry out, ” ‘Oh, Charley. How could you?’ “â€”but Albom often strikes a nerve on his way to the heart.” From Publiahers Weekly