Ever walk past a campus tour and wonder how much of it is true? While most of it is, and we love the plug for “your own librarian,” there are a couple of long-standing inaccuracies that we’d like to put to rest:

“No building on campus can be taller than Gilman Hall because that’s what’s in Gilman’s will.” Wrong. Decisions about buildings’ heights, including that of the library, have been made based on the scale of the campus and the architecture of Homewood House. Stand at the middle of the lower part of the beach, and look through the glass windows of MSEL. Notice anything? That’s right–Gilman Hall is beautifully framed in the center.

Gilman died in 1908, and mentioned nothing in his will about buildings. In 1912, the Trustees began to plan a new “Academic Building.” This was completed in 1915, and formally named after Gilman in 1917. 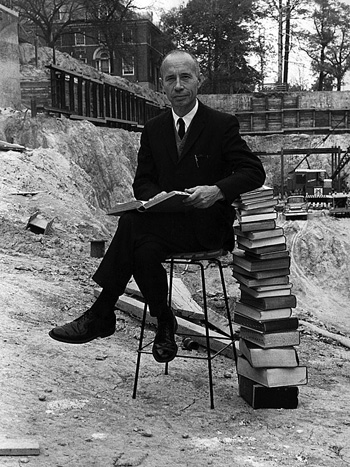 library opened on November 15, 1964, there were just over 1.1 million books on the shelves.

Second, no sinking occurred. The weight of the thousands of shelves and books had been calculated into the plan, and the foundation was, and remains, more than adequate to hold the weight.

One thing that is true about the library is that when the hole was dug, an underground stream was discovered, and had to be rerouted before work on the building could continue. John Berthel, the library director at the time, poses in the recently dug hole with some of the books that would later grace the shelves.