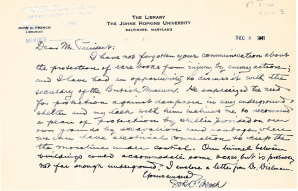 On this 77th anniversary of the attack on Pearl Harbor (December 7, 1941), we glimpse back in time to the challenges facing librarians and university staff in preparation for war as reflected in meeting notes and correspondences from our archives. These documents summarize plans for protecting the various collections at Johns Hopkins University. By the […] 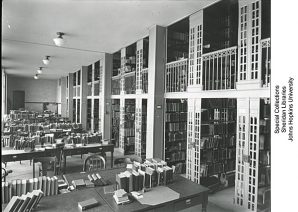 A group of private citizens, headed by William Wyman and William Keyser, donated land that became the Homewood Campus in 1902, and the library moved into new quarters upon the completion of Gilman Hall in 1916. The library occupied the inner portion of a hollow square on three levels, placing faculty and graduate student offices […]

December 7th, 2017 marks the 76th anniversary of the attack on Pearl Harbor. (See the 75th commemoration here.). Pearl Harbor is a U.S. naval base situated on the island of Oahu, Hawaii. On December 7th, 1941, at approximately 7:55 a.m., the United States was launched into World War 2 (WW2) when aircraft from the Imperial […]